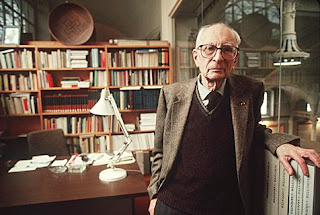 Claude Lévi-Strauss was the most famous anthropologist of his generation, and one of the leading intellectuals in post-war France. His writings inspired a major intellectual movement, and at least two of his books have already become classics of French literature. He was largely responsible for the development of social anthropology in France.

Lévi-Strauss's ancestors, the Strauss and the Lévi families, belonged to the long-established Jewish community in Strasbourg. Isaac Strauss, his great-grandfather, a violinist, moved to Paris and became director of the court dance orchestra at the end of Louis-Philippe's reign. Lévi-Strauss's father was a portrait painter, never very successful.

His mother, who was his father's second cousin, was the daughter of Rabbi Lévi of Strasbourg. She took refuge in the rabbi's house with her children during the First World War, and so Lévi-Strauss was exposed as a young child to Jewish traditions. After the War the family returned to Paris, and a secular way of life. At the Lycée Janson-de-Sailly in Paris he became a socialist, and while studying law and philosophy at the Sorbonne he served as general secretary of the federation of socialist students and worked part-time as secretary to a socialist deputy. After graduation he taught philosophy in a lycée for two years, and then, in 1935, he joined the French university mission that helped to found the University of Sao Paulo in Brazil.

Lévi-Strauss was eager to go to Brazil because he had begun to take an interest in anthropology, which was not yet a university subject in France. At the end of the first academic year he and wife travelled to the Mato Grosso to visit the Caduveo and Bororo tribes. This was an intensely exciting, formative experience. "I felt I was reliving the adventures of the first 16th-century explorers," he recalled. "I was discovering the New World for myself."

He then made a longer expedition, to the Nambikwara, also Amazonian Indians. Quite how much time he spent in the field is uncertain, but he and his party were constantly on the move, and his primary duty was the collection of ethnographic objects for the Musée de l'Homme in Paris. This was not fieldwork in the modern mode. His memoir, Tristes Tropiques (1955), represents the ethnographer's trade in the bleakest terms, but Lévi-Strauss claimed that he had learned at least what fieldwork was about, and that this gave him the confidence to make critical use of the published ethnographic literature.

Lévi-Strauss returned to France shortly before the outbreak of the Second World War. After a brief period of military service he was demobilised in Vichy. Rescued by the Rockefeller Foundation project to save intellectuals from the Nazis, he was given a post at the École Libre des Hautes Etudes de New York. He mixed largely with fellow exiles, regularly foraging for African and North American Indian art in the city's antique shops with André Breton, Max Ernst and Marcel Duchamp. The Russian linguist and polymath Roman Jakobson became an intimate friend. He was to be the most important intellectual influence on Lévi-Strauss's mature work.

Although he had some contact with American anthropologists, Lévi-Strauss very largely taught himself anthropology, pursuing his researches in the New York Public Library. "What I know of anthropology I learned during those years," he later remarked. After the War he served for three years as French cultural attaché in New York, while continuing work on a monumental study of marriage systems, The Elementary Structures of Kinship, which was eventually published in 1949.

Returning to Paris in 1949, Lévi-Strauss took his doctorat d'état and found employment in the Musée de l'Homme and the École des Hautes Etudes at the Sorbonne. There were no university chairs in social anthropology, but in 1959 his friend Merleau-Ponty led a successful campaign to have him appointed to the Collège de France. Here he built up the Laboratory of Social Anthropology, which became a leading European centre of research in the field, and launched the journal L'Homme. It was during his years at the Collège that he published his most influential books, La Pensée Sauvage, which appeared in 1962, and the four successive volumes of his monumental study of native American myths, the Mythologiques, which was completed in 1971. These became the defining texts of "structuralism". In 1973 he was elected to the Académie Française.

Luiz de Castro Faria, a Brazilian ethnographer who accompanied Lévi-Strauss on his major Amazonian expedition – although he was to be written out of Tristes Tropiques – concluded that he was a French philosopher rather than a true ethnographer. Lévi-Strauss thought of himself as a scientist, but his sympathies were always with the arts, and his theoretical inspiration came from philosophy. He had gone to Brazil in 1935 intending to put philosophy to an empirical test. Two issues engaged him in particular. The first was the intuition of Rousseau, his favourite philosopher, that the principles of social justice go back to the very origins of society. Among the Nambikwara Indians of the Mato Grosso he identified the basic political conditions idealised by Rousseau: equality, and leadership by assent. All relationships were rooted in reciprocity. The people imagined themselves to be in a similarly egalitarian and reciprocal relationship with the natural world. Gift exchange was a basic social mechanism, and reciprocity was something of a universal ethical principle, certainly in pre-industrial societies. In The Elementary Structures of Kinship he argued that kinship systems had evolved as a mechanism for the exchange of women in marriage. The incest taboo, the first rule, obliged people to enter into this most fundamental of exchanges, and so to establish societies.

The second philosophical question that brought Lévi-Strauss into anthropology had been raised by Kant's philosophy. If people have an intuitive knowledge of categories of time and space, as Kant believed, then these must be universal. But are our categories shared by remote and exotic people like the Nambikwara? Jakobson helped him towards an answer. A leading figure in theoretical linguistics, Jakobson claimed that he had split the atom of linguistics, the phoneme. The phoneme had been viewed as the smallest significant component of language, but according to Jakobson it was itself a bundle of features made up of pairs of contrasting elements (voiced versus voiceless consonants, for example). These binary oppositions were universally available, although in any particular language only some were put to use. And they were essential to communication. Sounds are meaningful only in contrasting pairs. So too are concepts. And binary oppositions tend to accumulate to form structures; a good example is the observation of the linguist Paul Newman that in many languages the sun and the moon are assigned to opposite genders.

Lévi-Strauss concluded that linguistics had achieved the stature of a true science, universal and objective, penetrating beneath the surface of appearances to the basic mechanics of nature. Anthropology should follow its lead. The sorts of things that anthropologists studied – ideas about the world, systems of classification, myths, kinship systems and rules of marriage – were collective, symbolic productions very much like languages. His ambition was to show that underlying the most exotic beliefs there was a common, rule-governed, human way of making up ideas: the universal mechanism of binary oppositions, rooted in the human brain, generates categories of thought. The elaborate play of structures based on binary oppositions is the subject of La Pensée Sauvage.

In the Mythologiques, Lévi-Strauss treated the native mythologies of the Americas as a single body of tradition. Recurrent symbolic oppositions were identified over this vast area. Some are universal, like nature and culture. Others are very widespread, like the opposition between the raw (which is food in its natural state) and the cooked (food culturally transformed). And he showed that myths manipulate the simple, concrete oppositions of natural thought to address the eternal cosmological questions – life and death, the foundation of the social order, the relationship between society and nature.

Structuralism became fashionable in the 1960s, but Levi-Strauss was embarrassed by the association of flamboyant figures like Barthes, Lacan and Foucault with what he regarded as an austere, scientific method. In Tristes Tropiques he expressed a deep distaste for the values of contemporary civilisation, and for the solipsism of modern philosophy.

After the traumas of 1968 he moved decisively to the right, inclined to praise ritual and tradition. In 1980 he voted against the election of Marguerite Yourcenar as the first woman member of the Académie on the grounds that an institution which had excluded women for three centuries should not precipitately alter its ways. He was a conservative ecologist, respectful of the spiritual valuation of nature that he attributed to the Amazonian Indians, and an advocate of the indigenous peoples movements. In the last years of his life he was closely associated with Jacques Chirac's grand projet, the Musée de Quai Branly, which exhibits some of his Amazonian collections, and whose main lecture theatre is named for him.